Every February is a scary blank slate. The best song writing tools are courage and hope.

Here's a picture of my wife and me singing our native cowboy soul music at a London venue. 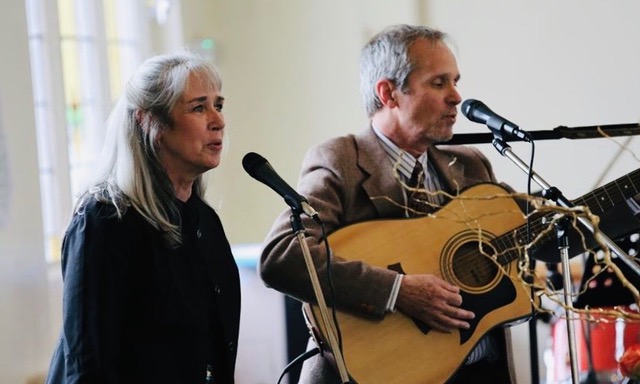 Some of my family are here too, and they're good.
@joeblomberg my long-time brother-in-law and longer time songwriting partner.
@hazzard , my niece.

Musical bio. My family is from Colorado USA but we moved to South America when I was two. The music of my childhood was Latin-Caribbean folk and pop, church hymns, and my parents' collection of Chopin piano pieces and Stephen Foster songs. I learned to read music playing piano, trumpet, and accordion. I wrote my first song at age 14 with my friend Joe, who is still by songwriting partner. At 18, I moved to the States (Chicago) and started a band with my college roomate who was a brilliant guitarist and basically taught me to play. Joe was at another college nearby and we wrote a rock opera. The band from the opera became my band. They were all from the South Side so playing clubs with them was my education in funk and soul.

In 1984 I married a bluegrass musician from Iowa. We bounced around between North and South America. Down South I arranged and produced salsa and Latin pop albums, and up North my wife joined a band and played the bluegrass festival circuit. I added a mandolin to my instrument collection, and a lot of bluegrass and country to my music influences. I also arranged and produced an album for a Navajo artist of which I'm still immensely proud, and that still gets radio play on the Reservation.

In 1995 we upped sticks and moved to Europe for good. Raised our kids in Manchester UK where we both did advanced degrees and taught. I've learned to get along anywhere, but there's something about the combination of working class directness, multi-culturalism, and "chapel socialism" inherent in Manchester that seems right, and I feel at home there. Even the rotten weather can't bring me down when I go back. Didn't play much music during those years but saw some great shows at the Apollo, Band on the Wall, and local pubs.

In 2005 we moved to Spain and joined the city Gospel Choir, and I spent ten years as pianist with them, and also studied jazz at a local academy.

I'm a mixed up mess linguistically, culturally, and musically. It comes out in the songs.

No songs by this fawmer (yet).